Anglo American Platinum (“Amplats” colloquially) is the world’s largest producer of platinum. At the time of this case study, they had more than 48,000 employees (that’s 48 THOUSAND) on their mines in South Africa.

In 2010, the head of Corporate Communications commissioned a demographic analysis of the workforce to see what messages the decade-old company newsletter, Our Voice, should have. It turned out that Our Voice, which was filled with “hatches, matches and dispatches” and otherwise dull corporate-speak in formal English, had not much to offer the employees. But what was the alternative? Who exactly were they talking to and what did those people want to know?

Thabisile Phumo, Senior Manager: Corporate Communications and Branding, commissioned an internal survey and demographic analysis of all the employees of the company, 48,802 people, wherever they worked, from most senior to most junior. Data on them was collected, specifically:

At least half a million unique entries formed the database, which is why it was analyzed by external consultant M.F. O’Brien, Manager: Mineral Resources & Mine Geology at AngloGold Ashanti, using JMP statistical software from SAS. Data was sourced by H. Steyn and C. Kern of Amplats’ HR Department. The data did not include any names of individuals or their dependents. Marthe Bijman, in her role as Corporate Communications Manager for Amplats, was Project Manager and produced the report as well as the matching media plan.

The analysis of the employee demographics showed up the following discrepancies that would make mass communication difficult:

To communicate with them about issues other than production and safety, the company would have to find other channels and platforms. The majority of workers lived in private housing off the mines, a big change from a few years before. But that offered an opportunity for communications that could reach them on a personal level.

Information about housing, job advancement, education, job security and safety – in their mother tongues – were all important to the workers. These were usually communicated in varying degrees of success by the HR Departments of each operation. Most communiques about these subjects, including shares schemes, retirement benefits and pension plans, were in almost unintelligible legalese.

Below, extracts from the final set of demographic reports:

Thabisile Phumo approved the plan which was based on the survey results, to match the communications media and channels of head office and the mines to the abilities and needs of the workforce. The consensus was that the  media and channels that were being used either were not understood or had to be amended to work better. The media plan was obviously on a massive scale to reach all the employees on all the distributed operations, and therefore required a significant budget. Moreover, the media and channels had to fit into the corporate communication rules of Anglo America  head office in London, which applied to all operations around the world.

A graphic novel series of paperbacks, called “Digger”, for the older, illiterate or semi-literate workers, to take home and read with their families. Note that this was a graphic novel, not comic book – there was no distortion of reality and no fantasy involved. The language proposed by the illustrators, as can be seen in the sample pages below, was definitely on much too high a level for the demographic it was intended for, and had to be toned down. All the text in the books was subject to a Flesch-Kincaid Reading Ease and Reading Level test, and all the imagery had to conform to Anglo American’s Health And Safety rules.

The broadcast rights for a private radio station, Platinum Radio, to reach the workers at home and on the buses to and from work, in their mother tongues.

A safety advertising campaign that did not feature only management, but the workers in their own words, and in their own mother tongues, called “My Values Story” (above) was launched. It was based on the principles of Behaviour Based Safety Observations (BBSO). BBSO is an integral part of behaviour based safety programs, which aim to reduce the number of incidents by recognizing safe behaviour and the thinking underlying that behaviour in individuals, thereby eliminating unsafe behaviour. The idea is that safe – and risky – behaviours are based on an individuals personal values and reasoning, and that each person is different.

Those employees who could not write, could get a friend to write down their stories – so long as as many employees as possible could explain themselves. A prize for each submitted story would be a wind-up radio, so that workers could listen to Platinum Radio at home where they may not have electricity. (At the time, South Africa had a big problem with rolling national electricity blackouts.) The stories and the competition were published in the company newsletters and on posters around the mines.

For the workers who did have secondary education, the company commissioned the development of an on-line version of the company annual report, with info-graphics to explain the financial terminology in ways that they could grasp.

For the management-level employees, they approved the development of an e-zine (basically a news blog with RSS) that they could access on their iPads when travelling between mine sites.

The old newsletter, Our Voice, was continued, but with somewhat different content than before, focusing on issues that matter to the workers. For a start, the writing in all the mine publications had to be in Plain English with specific Flesch-Kincaid Reading Ease & Grade Level scores (see the graphic). This included contributions about safety, pensions, shares, medical schemes, etc. 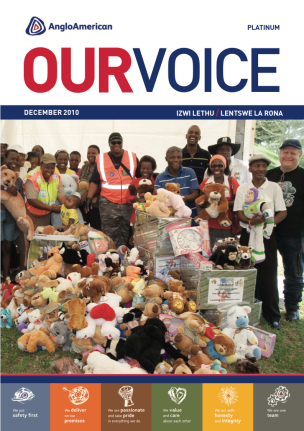 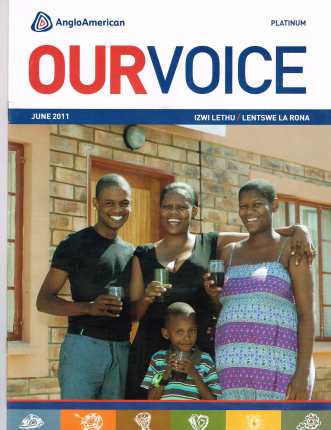 All these media were given high-end design by Adriaan Laubscher and his team of writers, editors and graphic designers at Rhetor CC. It made every piece of information given to the employees look professional, readable and attractive. Anglo American Platinum is the world’s largest producer of platinum and every communique had to match the company’s style and status. Every communique and product was also properly aligned to the Anglo American brand, corporate communication guidelines and Corporate Identity specifications. Within these constraints, Rhetor’s crew did an excellent job.

To launch all these initiatives – and many more not mentioned here – required the understanding and support of the CEO, Neville Nicolau, the Executive Committee and the Corporate Communications team.

This program proved how an extreme turnaround in communications and branding is possible,  once a company definitively knows who they are talking to by doing research, not by making assumptions and doing guesswork.

What we’re going on about